This month we bring you an in-depth interview with the amazing, ferocious and fierce Artist and Musician MIKE HRUBOVCAK.  Over a year ago I stumbled upon Mr. Hrubovcak website and it was like walking into a real art gallery of madness and horrors.  I tell you I have never in the history of being a horror/gore fan never seen such powerful, dimensional, graphic detailed art works.  His works damn rock gore madness... 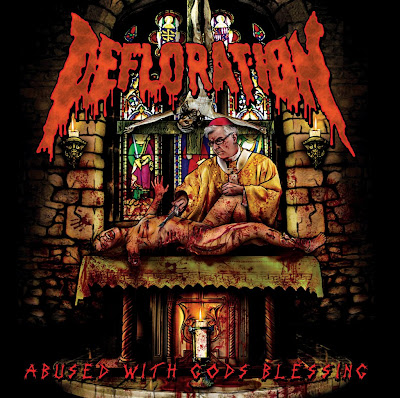 EYEPUS: Can you please tell EYEPUS a little bit about yourself, where you from and how you started in this field?
MIKE HRUBOVCAK:  I've been doing art my whole life, really ever since I could pick up a pencil. I grew up in the suburbs outside Philadelphia, PA and attended art classes since I was 7years old or something. Even in school growing up I knew I was going to go into something art related. I just didn't have the attention span for anything else and was always getting kicked out of classes and causing trouble and never really cared about anything else besides art and music. I also found death metal when i was around 10 years old too, which really sparked my interest in album covers, and expressing my dark teenage angst through painting. It slowly evolved ever since.
EYEPUS: When did you first discovered your amazing talents?
MIKE HRUBOVCAK:  Well I never thought my art was amazing, it's just what I loved to do. It was very therapeutic.  Even today I'm a perfectionist and I'm usually never happy with anything I do, but i guess that's the only way to get better is to keep pushing yourself. I don't think I found my own personal style though until like around college. Every artist goes through a period of experimenting and emulating their favorite artists and then in the process you end up finding what works best for you and your own style starts to unfold.
EYEPUS: Could you tell us about some of your work?
MIKE HRUBOVCAK:  Most of my work is done for the Death Metal scene, Black Metal, Doom Metal, etc... Every once in a while i'll do a personal piece or a design for a movie DVD cover, logos, advertising and more commercial stuff but for the most part it's always album covers and T-shirt designs for bands which was my main love to begin with and I think always will be, even though i'd love to chance to work on more horror movie covers. 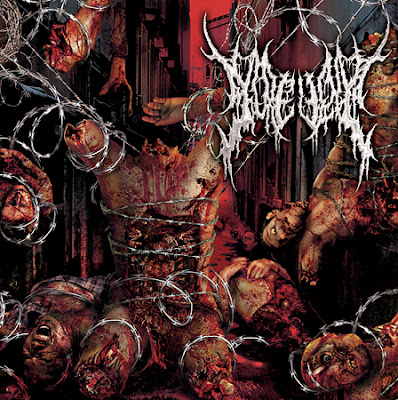 EYEPUS: Your art works are beyond the damnation of horror, amazingly and wonderfully graphic, What artist or artists inspired you?
MIKE HRUBOVCAK: Growing up I loved the album covers of the early 90's Death Metal CD's, Dan Seagrave, Wes Benscoter, Kristian Wåhlin, Andreas Marschall and people like that inspired me. I was also inspired though by surreal artists, and the music in general. I loved turning the lights out, zoning out to a particular song I liked, allowing whatever random visuals to form in my head, and then turn the lights on later and sketch out whatever my visions were from the music. I would then do a more refined sketch and then transfer it to my canvas to begin painting it. I was also huge into horror movies as a kid too, so watching a lot of zombie flicks also inspired me.
EYEPUS: Did you go to art school?
MIKE HRUBOVCAK:  For seven years I attended art classes, comic book classes, etc., apart from normal schooling all throughout high school. I then went to an art college for four years in Philadelphia at Hussian School of Art. At first i wanted to major in illustration, but later switched to graphic design. I now do both graphic design and illustration - graphic design more-so for the money and illustration for the real love of it.
EYEPUS: Who are your favorite horror filmmakers?
MIKE HRUBOVCAK:  I know horror fans always say the same thing, but of course growing up it was George Romero, Lucio Fulci, Tom Savini, Tobe Hooper and Peter Jackson for the more comical horror (ie, Bad Taste, Dead Alive, Meet The Feebles). Troma was always good for that too, like Redneck Zombies, etc.,.
EYEPUS: Did any of them inspired your artworks?
MIKE HRUBOVCAK:  If you look at the album cover i did for Mortician "Re-animated Dead Flesh" it's obvious that i was watching a whole lot of "Day of the Dead" at the time, with the obsessed scientist. Also for the album cover for the band "Mr. Death", they wanted that old school zombie feel, and I was watching Andrea Bianchi's "Burial Ground - The Nights of Terror" a lot with the zombie monks, so that was a definite influence on that cover. 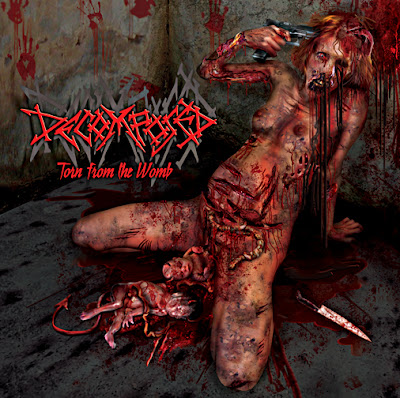 EYEPUS: Any favorite all time gruesome, gory films?
MIKE HRUBOVCAK:  Off the top of head, hmmm, that's a hard one, of course the original Romero Dead Trilogy is at the very top, Dead Alive, Texas Chainsaw Massacre, Hellraiser, Return of the Living Dead, Re-Animator, Chopping Mall, Basket Case, Evil Dead, Event Horizon, The Prophecy, Cabin Fever, The Descent, Warlock, Mark of the Devil, Alucarda, the list goes on and on...
EYEPUS:  Various posters of your works were shown in the background for the horror film DREAMHOUSE (2011, Starring Naomi Watts and Daniel Craig), how did they approach you to show your works in the film? And how was that experience for you?
MIKE HRUBOVCAK:  I got an email from them out of the blue, I guess they found me from searching the web for death metal posters. I was excited not only to have a possible glimpse of my art in the background, but I thought it'd be good promotion for the bands as well. They said they had a scene with some death metal kids in an apartment who had band posters and stuff all around. I remembered seeing a scene in The Butterfly Effect that had poster art from Wes Benscoter for S.O.D. magazine at the time in the background, so it would have been cool to have seen something similar with my art. I had submitted a good amount of artwork to them, even logos for band's I've done (which i had to get permissions for) for them to spray paint on the walls, etc.,. Unfortunately though I've watched the flick, and was disappointed cause I didn't see anything haha.  I know how it is though, they shoot so much footage, but then once it's edited together, chopped up, etc. a lot of what was filmed is never seen. I had my fingers crossed for a quick two second glimpse panning by or something at least, but instead I think that scene must of been cut altogether, I don't know, oh well.  Maybe if I buy the dvd it'll be somewhere in the deleted scenes, but again that's probably wishful thinking. It was still an honor though even to have been asked.
EYEPUS:  Your work is very life like horror/gore dimensional, when i stare at it, it feels like if it was a scene from an italian giallo horror film, did you ever think of making a  horror film or a music video with the powerful images you have in your artworks?
MIKE HRUBOVCAK:  Thanks a lot for the compliment.  Thats a good idea to put my images into a film or video. A while back I got asked to participate in an animated rendition of Night of the Living Dead, called: "Night of the Living Dead - Re-animated". I really wanted to do this, and looking back now I really wish I would have, but unfortunately at the time i was swamped with work and was way to busy touring with my bands at the time. My one big problem in life is finding the time to do all the awesome things that come along. I don't have any pro editing or film programs so i wouldn't know the first thing about going about animating my art, besides tediously creating frame by frame images which would take me forever. I guess eventually it would be a fun thing to try, maybe one day once i get the time.
EYEPUS: What's the first artwork you ever sold and how was that experience?
MIKE HRUBOVCAK:  Hmm, that's hard to remember. When I was a kid I would just do art for bands that I liked for free to get my foot in the door. I think one of my first actual paid for covers was for Abominant on Wild Rags records back in the day. Actually I think I sold a pen and ink drawing at some gallery show when i was a kid or something, can barely remember. Once commissions starting coming in though it was great to see that maybe my art is something that could actually support me, which was a great feeling cause it's doing something that you love, and doing that and being able to get by with it is rare. 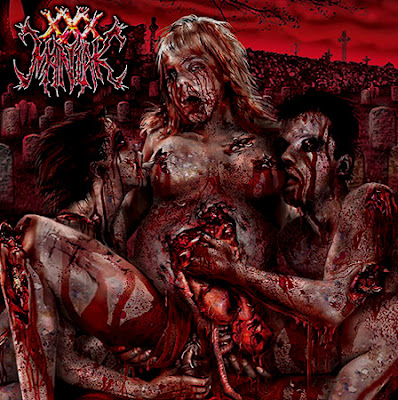 EYEPUS: How long does it take you to make a piece of your artwork?  Any particular techniques or styles you use?
MIKE HRUBOVCAK:  It all depends really on the concept or how detailed the idea is. I've had some covers that had deadlines, and i had to cram and get it done within one week. Other covers though and more often it takes me about a month. Lately, though since I've been so swamped with my music life, it's good to be given even more time then that, even though I normally get it done sooner then I expect but it's better to do it without having to rush ya know.
EYEPUS: Has anyone or art galleries tried to condemned (censored) your artworks?
MIKE HRUBOVCAK:  Haha, yeah. I mean I haven't really done too many gallery shows, but when dealing with printers, I've had a lot of printers refuse to do it. So then I'd have to go through the process of recommending some printers to the bands that would be cool with printing the really graphic stuff. Also the more commercial record labels have a lot of problems with their mainstream distributors not accepting anything too graphic, so I've had to tone down a lot of things because of that too. Someone once said they heard my art referred to as "the ultimate fuck you to the world" haha, and I thought that was great.
EYEPUS: What are your current and future projects?
MIKE HRUBOVCAK:  Right now I'm working on another album cover for the band Sinister, involving demons and a more anti-religious theme overall. I just got done another cover for the band Guttural Secrete as well, which is pretty over the top. Soon i'll be starting on a personal piece though for an album that I'm making myself for my one band Azure Emote, which I really want to spend a lot of time on and make totally epic since the whole thing is really me, musically and artistically.
EYEPUS: Any piece of advice for aspiring artists?
MIKE HRUBOVCAK:  Just stick with doing what you love, if you love it enough you'll find a way to make it work in your life so you can do it all the time. Also i'd try other ways of thinking or looking at things, a lot of people's styles are all starting to look the same these days cause everyone's copying each other. Improvising and trying different things is the best way of finding your own.
TAKE A TOUR OF THE ARTWORK OF MIKE HRUBOVAK WEBSITE
www.visualdarkness.com
Posted by EYEPUS at 3/17/2012