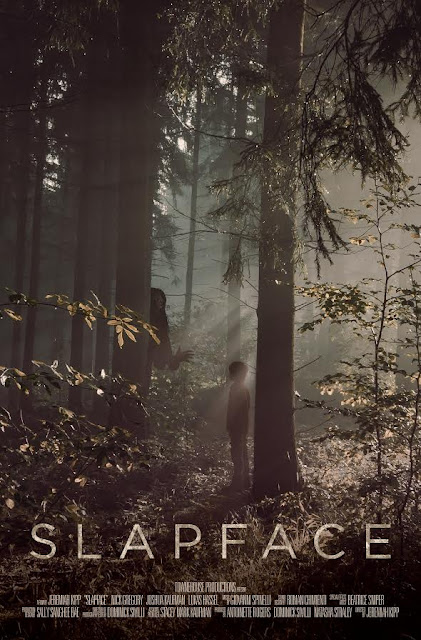 SLAPFACE, a short film written and directed by Jeremiah Kipp. A young boy (Joshua Kaufman) is grieving the loss of his mother, so he finds comfort with a monster (Lukas Hassel) who lives in the woods. The monster is very androgynous, long hair, long nails and a chattered face. As the boy calls the monster out loud in the middle of the woods, the monster comes out, and in a tender moment the monster hugs the boy.  The Dad (Nick Gregory) who is a semi brute, finds his son, asleep, laid out in front of their front lawn. He brings his son inside the house forcing him to take meds, but son refuses to take the meds - the scene becomes a bit disturbing and creepy, that’s where the film get its title – SLAPFACE.  I will not spoil it for you... You need to check it out. The film leaves you wanting more, for a full length feature.  Kipp brings the best out of his actors with fine performances, and gorgeous cinematography. The short film is yet another great mysterious, fantasy/horror opus by the ferocious Mr. Kipp.  SLAPFACE will be making its rounds in the film festival circuit.