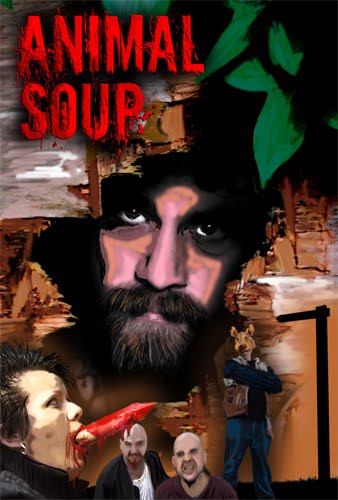 A film not for the faint of heart... Get ready to gag because ANIMAL SOUP (UNCENSORED) is one nasty, sick, little fierce film ride. A true indie, miniscule budget impressive debut by filmmakers DAVID V.G. DAVIES and JAMES A. KIRBY.

The story: Four Campers - in the mood for a hike in the woods come across with some grisly, wicked, ferocious, nasty motherfuckers, especially one that looks like Charles Manson named Mad Tom (played amazingly by David Pliskin) who sports a little bra (hilarious) and shitty pants.  Once the happy campers encounter these savages is all a sick, depraved blood fiasco. 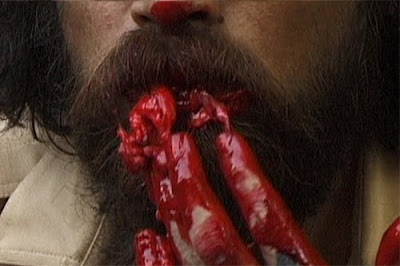 ANIMAL SOUP is out of control, twisted and downright outrageous.  From defecation, excrement splats, peas and carrot vomit to shockful of blood, gore, guts, brains and animal soup.  I was speechless with the film's rawness.  I haven't seen such daring, shady, raw boldness since the early works of John Waters (MULTIPLE MANIACS, PINK FLAMINGOS) and Passolini's SALO: THE 120 DAYS OF SODOM.  ANIMAL SOUP is like a rare, forgotten 80's video nasty - it pays homage to the 70's horror exploitation cinema to the 80's video nasties - Kudos for the filmmakers for being so damn daring.

The filmmakers cut straight to the chase (ready to hack and slash) - none of that long boring dialogue that you see in tired ass recent horror films.  The film editing is very well done at a fast paced.  Amazing videography - beautiful animal shots and the green, country side pastures.  The film has an 80's look to it.  A banging soundtrack by Spit Like This, JackViper, Spiderbaby and Computers for Schools.

This is indie/miniscule budget horror/gore at best, and if you are ready to gag and have a good old time see ANIMAL SOUP.  A worth while shocker better than some lame Hollywood films such as the "SAW" series, and the dreadful PARANORMAL ACTIVITY...  There is a sequel to ANIMAL SOUP in the works.  I hope they bring back the amazing characters - Mad Tom (David Pliskin) and the lovely Sophia Disgrace as Mia.

ANIMAL SOUP delivers and it gets FOUR STARS from EYEPUS.

Anyone interested in purchasing ANIMAL SOUP go to:  WWW.FILMMA.COM
Posted by EYEPUS at 3/02/2010 No comments: