THE SWEET HAND OF THE WHITE ROSE - SHORT FILM REVIEW

The Sweet Hand of the White Rose begins with looooong credits, looooong takes of a lounge, its patrons and finally we are introduce to Mark (Carlos Bahos). Mark is having some issues with his girlfriend (Leocricia Saban).  Mark is on the road, his cell phone rings, he picks it up, and suddenly he skids off the road - ends up SLAMMED... Seconds before, a young, innocent little girl (Natasha Machuca) leaves the park, on her bike, with a sweet smile, she rides her bike up the road... From here on the film begins with some religious, heavenly, inter-faith sweet but eerie story... Is Mark dead? 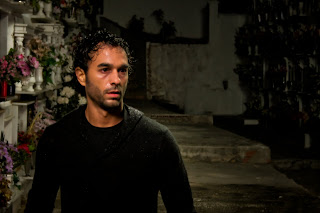 Filmmaker David Melide (The Puzzle) short film The Sweet Hand of the White Rose is an interesting short film just for its amazing cinematography. The story begins and it goes nowhere.  The distracting voice overs were annoying as hell, it took me away from the little bit of suspense I was feeling for the film.  When Mark's voice over begins while he is driving – I’m here sitting down watching this thinking is this a 'black comedy'. The cinematography full of great shots, but too many long scene takes dragged the film a bit. For example the film begins with a singer singing, camera is focus on her for a good minute or two, later after two minutes is when the camera POV on Mark.  This is not a feature film where we can have all those long takes (Legendary filmmaker Michael Haneke could get away with this) but not in short films - short films is about lets get to point and the story - no need for long credits (this is not a Michael Bay production with long credits) and no long takes. 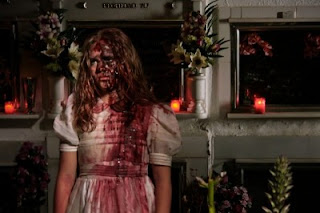 THE SWEET HAND OF THE WHITE ROSE gets TWO STARS out of FOUR STARS.