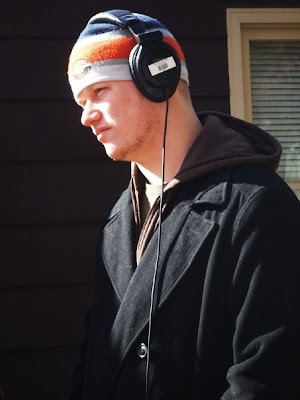 EYEPUS: How did your passion for filmmaking got started?

MAC ELDRIDGE: I don't have the typical start in film making where someone in my family took me to the theater constantly. Instead, my brother's best friend got a job at the local theater and constantly took my brother to the movies. Once my brother got tired of it and stopped going, his best friend took me instead (as he thought I was the closest thing to my brother). I was taken to see The Life Aquatic with Steve Zissou one day and it was then I realized that films are more than just entertainment: they could be whatever I wanted them to be. I started making movies with my brother's best friend with a little sony hand camera in our backyard and now I just wrapped my last production shot on RED. Its a surreal experience when I look at the big picture.

EYEPUS: Did you attended film school?

MAC ELDRIDGE: I still attend film school in Chicago at DePaul University. I'm entering my final year here and I cannot speak any bad about the experience. Its free equipment and they let me shoot what I want (more importantly, the work I produce is mine, not the school's like many other film schools). I made Chemical 12-D as a sophomore in my first production class. Before entering college I was certain I was just going to go out to LA and start working, but my DP David Wagenaar convinced me to come here. Thankfully, he did or else I wouldn't have gotten to make 12-D amongst other projects that I've had a blast making.

EYEPUS: Any favorite horror films of all time?

MAC ELDRIDGE:  I'm a list man. That meaning, I constantly create lists and they constantly get rearranged as well. With that said, I have my five favorite horror films of all time listed below (and in order).

As I said, its constantly changing but its always between these five. For the past couple of years Alien was my favorite, but now The Thing has taken over as of late.

EYEPUS: Who are your favorite horror filmmakers?

MAC ELDRIDGE:  I always find this to be a tough question since a lot of my favorite filmmakers are genre filmmakers. If I had to stick strictly to my favorite horror director, I'd have a tough time figuring out any outside of a few (Cronenberg, Carpenter, and Romero are a few to come to mind) but I must say that my favorite filmmakers are genre filmmakers. This is the likes of Hitchcock, Del Toro, Kubrick, and Neil Marshall just to name a few. I always feel bad for the guys who get pigeonholed into a genre as I know they probably want to tell some stories outside of their respected genre.

EYEPUS: How did your film company Water Cooler Productions come about?

MAC ELDRIDGE: Water Cooler Productions came about from a project that never got made. Back in the day when my friends and I were 16 or 17, we wanted to shoot a project that focused around a few water fountains and water coolers but the project never came to exist. Since then, our motto has been to give people something to talk about around the Water Cooler. We now produce some work outside of our own but mainly it is a production company where we fund and create projects helmed by us. 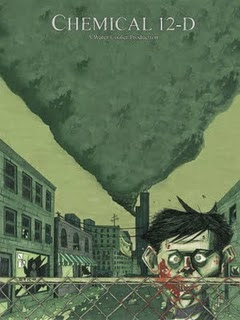 EYEPUS: What inspired you to make your astounding zombie short film CHEMICAL 12-D?

MAC ELDRIDGE: To be quite honest I never wanted to make Chemical 12-D as I always say that the film is my DP's baby more than it is mine. I was in pre pro for a love story I fell in love with but funding never came through so David (my DP) told me to write a zombie script. I was hesitant because the indie circuit was filled with zombie movies (a lot of them not being good, mind you) and if we made a zombie short we would be lost in the trash. Well, needless to say I was wrong. 12-D has been our most succesful short thus far and it has gotten more praise than I ever imagined. When I wrote the film though I wrote it to be an abduction film where zombies just so happen to be a part of the story. I think thats why it is successful. SPOILER: If you notice, throughout the entire film not one zombie hurts anything; its always the humans creating pain and death. I think that resonates with some people. The other big pull to me is that this is a scarier movie if you're a parent. Its about the horror of a mother.

EYEPUS:  Which film/video camera did you used to make CHEMICAL 12-D?

MAC ELDRIDGE: Chemical 12-D was shot on the Panasonic HVX200A with a Letus adapter. The real beauty in the film is seen in the post production and what our colorist Ryan Linich did to it. The film would have a completely different vibe and feel to it if it weren't for him.

EYEPUS:  How many days and hours did it took you to shoot CHEMICAL 12-D?

MAC ELDRIDGE: We worked on Chemical 12-D for one solid weekend of photography (roughly 8-10 hour days) and one day for pick ups the following weekend. The garage scene was the longest to shoot as it took 8 hours by itself due to SFX and how long the chest cutting bit took to set up. Post production was a much, much longer experience than production as we have 3 or 4 different cuts of the film with a few different sound mixes. 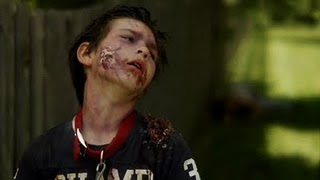 EYEPUS: How was your experience working with a child actor in your film?

MAC ELDRIDGE: Working with children can be tough as I found out from my latest production. They can be a real hassle if they're not wanting to do it (what I'm really saying is that stage moms are tough to deal with) but working with Wesley Klepac was a dream. He layed on the operating table for 8 hours with no complaints and he did everything I asked of him on the first take. In our down time we'd talk about sports and throw a football around. I can't think of one negative mark against him. If his passion for acting continues on into the future, you'll be seeing him around. Hes a real talent.

EYEPUS: Any hardships in the making of the film?

MAC ELDRIDGE: This was by far the most fun I've had on a set. Looking back on it, other than the typical hardships of scheduling and such, I can't think of too much that proved to be real frustrating on set. 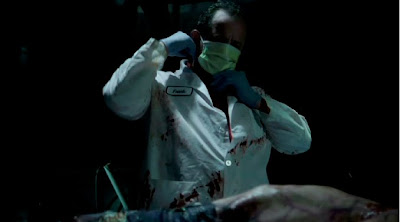 EYEPUS:  How was your film festival experience and reactions with your film CHEMICAL 12-D?

MAC ELDRIDGE: The festival circuit has been great to us as we have just played our biggest festival to date: Fantasia Film Fest. There were roughly 750-800 people to see The Human Centipede and we opened for it. It was again another surreal experience as only four years ago we couldn't get anyone to watch our work and now we're playing internationally to hundreds of people who don't know us or owe us anything. It was incredible and if that was the peak of my film career, I couldn't be happier.

EYEPUS: Any distribution deals in the future for CHEMICAL 12-D?

MAC ELDRIDGE: 12-D has been offered a distribution deal twice for online distribution/netflix. We had to turn them down both times as things just didn't make sense for us but as of now, YouTube is great. People get to see our work and that is all we really care about. The more people to see our work, the better. People have come to me about a feature which is something I'd be interested in doing. Believe me, I have an idea stirring in my head I don't think the zombie genre has seen before.

EYEPUS: What was your overall budget for CHEMICAL 12-D and how you got the funds?

MAC ELDRIDGE: 12-D was funded out of pocket and funding wasn't a grave concern as we get all of our equipment free. I've seen around the net that people said we had a grand. That is not true. We didn't even have 500 bucks. We had favors and people who wanted to be involved with the project. Its crazy to see how far a few computers with facebook favors go (along with free rental equipment from film school).

EYEPUS: Is it hard getting funding in making a film?

MAC ELDRIDGE: Extremely but it can be done. Our latest short (The Old Man and His Dog) is our biggest budget to date and funding it was tough. Luckily a few kegger parties along with fundraising events can get you places very quickly. I always say this: everyone has a rich uncle or something like a rich uncle who can be tapped for a few bucks once or twice. Get a great project with great people involved then tap your uncle's shoulder for your one shot. However, with the way technology is going, the most expensive things on set now are catering. What I'm saying is that anyone can make a short with a few favors and an understanding of technology. Money should never stop you from making a production but only make your life easier.

EYEPUS: Lately, I’ve been asking filmmakers about horror film remakes - With so many classic horror movies been remade, which dream favorite horror film would you like to remake and why?

MAC ELDRIDGE: I have two answers for this. If I could remake a movie out of the sheer fact that I want to be a part of that franchise then I'd remake Alien. I'm only saying that because I'm such a fanboy and I want nothing more than to be a part of that franchise. It doesn't need to get remade but I want to do it anyway. With that said, the movie I actually do want to remake in a very, very bad way is Frankenstein. I think Del Toro will beat me to the punch as he wants to remake it also but I've always been infatuated with that character. I got a few ways to tell that story but its something I wouldn't tackle without a serious budget behind it. Maybe one day, but until now, it sits in the back of my brain as an idea.

EYEPUS: Do you have any upcoming film projects in the horizons?

MAC ELDRIDGE: I just wrapped production on my last short The Old Man and His Dog. Its a ghost story I have treated like my baby for the past year. We're in post production now and I can't wait to have it done for 2011. Its my The Devil's Backbone if I had to relate it to any other movie. After that, Water Cooler Productions is pretty much open however we have already decided that we are shooting a less serious horror film that we hope to shoot starting next March. We need a break after being so serious for almost two years and some fun action/horror stuff will be a blast to shoot.

EYEPUS: Any inspiring words or advice for upcoming indie/micro budget/or the very low zero budget filmmakers trying to struggle with a small penny to make a film?

MAC ELDRIDGE: I  touched on it already but my main thing now is that you don't NEED a budget like you use to. Back in the day it was 16MM, buying the film, processing it, getting a steenbeck to cut, printing the film, etc. etc. You needed money but not anymore. Paranormal Activity and The Blair Witch Project are great examples of movies made with no money. It can be done. Its finally all about creativity!
Posted by EYEPUS at 8/05/2010