I havent seen or review the nasty, ferocious horror film from the UK ANIMAL SOUP because is not yet available in the USA for purchase, but I got a chance to interview the two exceptional ANIMAL SOUP Filmmakers David V G Davies and James A Kirkby. A while back I picked up an issue of RUE-MORGUE, as I was scanning through the pages I saw a write up on ANIMAL SOUP, a very inspiring write up about the making of this film - from the hardships to the bloody make-up effects featuring real butcher shop animal innards. After reading this write up I was very inspired to make a horror feature in the future (which hopefully I will) and to talk to these wonderful guys, and all it took was one email asking them if I can interview them for EYEPUS, which I was so afraid they were going to turn me down, pleasantly and politely these sweet gentlemen gave us a wonderful interview… 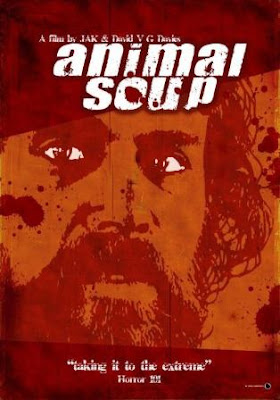 Can you guys introduce yourself to us at EYEPUS, and tell us who is who in in your company FILMMA, and how you guys became film partners?

FilmMA produced Animal Soup with myself, David V G Davies, as Director of Photography and Editor and James A Kirkby as Writer, Director and cast. Lee O'Neill, a FilmMA regular, also aided in the production as Assistant Editor and Camera as well as taking on a cast position. We joined forces due to a lack of help from the industry and a joint interest in guerrilla film making.

What made you guys built FILMMA and what is FILMMA all about?

I set up FilmMA after having no luck getting into the film industry as here in the UK it seems to be a case of who you know rather than what you know. Even with my experience people would say 'who the hell are you' so I realised I was anonymous in the eyes of the industry, so Film Makers Anonymous was set up as a platform for like minded aspiring filmmakers to join forces and gain a cast and crew in order to get their films made.

How you guys got into the horror genre?

With the current boom in horror cinema we were both fed up with the constant remakes being churned out and so we both began writing horror scripts unbeknown of each others work but it was James who completed a script and approached me for help first. We were lucky enough to meet some Horror celebrities at film festivals and the project instantly gained interest via the social networking sites, myspace and facebook. 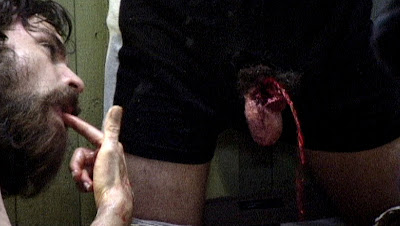 James and I have always been fans of horror, James is a fan of the early exploitation films while I lean more towards foreign film and the slasher films of the 80s.

Who is your all time favorite horror filmmakers?

Can you tell us about your horror, controversial ANIMAL SOUP?

James A Kirkby: Animal soup was born out of a passion to shock people with horrible visions while counteracting them with the lovely landscape around where I grew up.

How many days did it took to make ANIMAL SOUP?

James A Kirkby: The actual shoot was 6 weeks but due to all the problems we had, those 6 weeks were spread over almost 2 years starting in the September of 2006 and ending in the May of 2008. 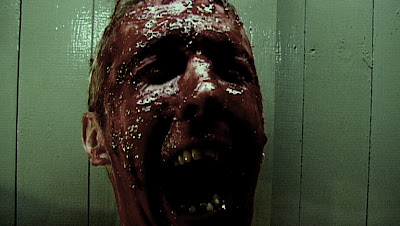 Was it hard to edit ANIMAL SOUP?

David V G Davies: I love to edit and was thrilled to tackle my biggest project to date. Having 45 hours of footage and needing to chop it down to 90 minutes seemed to happen very quickly. Where i struggled was getting color correction and seemless cuts due to the difference in time of year in which we filmed, i also encountered further continuity problems. After screening the film and getting feedback, a second edit was underway which with Lee's help became a stronger film.

Any hardships in the process of making your horror opus - ANIMAL SOUP?

James A Kirkby: We were inundated with problems from early on in the production. The first problem we had was our two lead cast members Mike and John left the production after only 5 days shooting, they let us keep the footage but we had the problem of where the film goes from here, we only had the climax and no lead up, so we re-wrote the script introducing 2 new characters Mia and Teri we were afraid the film would look odd having this change but hoped the writing would save us. Then Terri left before all the narrative structure was filmed so again we only had climaxes. Lee stepped in as a new character and Dave body doubled for Teri in the hope to save the film.

David V G Davies: What we were left with was an 83 minute film that dragged at the beginning due to lack of narrative. After screening the film, having some reviews and selling a few pre-release copies I decided a new edit was needed, I cut the film down to 67 minutes and found we had a winner. 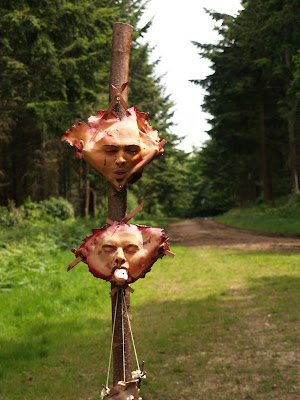 What was the estimate budget for ANIMAL SOUP?

From experience I had discovered that people are very reluctant to fund a first feature made by unknowns that would most likely get banned due to its graphic nature so we decided to fund the film ourselves, James fronted the money during production while I took hold of the costs of post and publicizing. At the end of the project the entire cost of the film was less than £3,000.

Which cameras were used for the film?

I used a Sony VX1000e it is a little old now but is a great pleasure to use.

Was it hard getting music clearances and music artists for your film?

We were very lucky with music as we both scored some ourselves but we were inundated with offers from bands wanting to let us use their music free of charge, some great bands helped.

Can you tell me why ANIMAL SOUP is not been distributed n the UK/and who is distributing the film?

In the UK our censorship system is constantly under scrutiny, we wanted the film to be seen in its entirety, we made it that way for a reason and thats what we want the viewer to see. We are both very much against censorship and therefore scour to find the definitive versions of our favorite films. Animal Soup was made to shock and some of the scenes were described as too graphic for an 18 certificate (R) we are in the process of resubmitting for an R18 the only problem with that is we would only be allowed to sell the film in licensed sex shops and immediately reduce our audience. 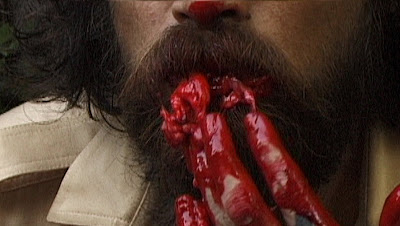 Any sequels for ANIMAL SOUP?

Both James and I would love to go back to the world of Animal Soup and already have a script for a sequel and a prequel, we have also thought about making 6 shorts to continue the saga.

Can you tell me a short premise of your upcoming opus THE MONITOR?

While James and I were coming up with ideas for Animal Soup: Cold Harbour (a prequel) I loved the idea of setting a horror in a hospital, Lee and I then set to work on Monitor. Monitor is set in a rehabilitation institute where the staff have created their own sinister ways of coping with stress (more info on monitor will appear on FilmMA.com).

Aside from THE MONITOR, any other future film projects?

Animal Soup 2 and Animal Soup Cold Harbour are still on the cards as is a possible companion piece to monitor. Two films set around the 2012 olympics have been written and are awaiting funding in the meantime FilmMA is also helping with the production of Celebrity Shitlist a black comedy horror.

What advice can you give to indie/struggling horror filmmakers trying to make their first film?

I emailed Lloyd Kaufman and when he was in London at a convention he agreed to appear in our film. There are some people out there who do support independent filmmaking so don't be afraid to spend time surfing the internet.

2. Dont try to be too elaborate.

Often the simplest idea works just as well and remember write something you can actually film.

3. Recruit people with the same passion for the project as yourself.

It's no good having people who aren't interested. On Animal Soup our two lead actresses" enthusiasm encouraged us and made the production a more enjoyable experience.

4. It doesnt have to cost a fortune.

Other than providing to your cast and crew keep costs down by 'making do'. Make a few sacrifices but keep receipts, if the film makes a profit, recoup your costs first.

5. Be prepared to multi-task,

You do not need a huge crew, Animal Soup is being made with a crew of two, each of us doing up to 19 different roles each.

6. You can never have enough gore.

Although the human body has on average 7 pints of blood, use more it looks great.

You can achieve so much with lighting, to invoke a sick feeling in the audience use green light bulbs, you can hide the edges on special effects with shadows. However, always remember to set up your camera each time you change the lighting.

8. Exploit your family and friends,

Use their houses, their garages, get friends to carry equipment, if possible get them to be cast and crew. If someone has a talent write it into the script.

Until I set up a web page and a profile no one knew about our film, now we have been in touch with people that are highly respected within horror, we have gained a fan base and have even film festivals approach us.

Most home computers have a basic editing package installed and if you have a camera, all you need is a cast, a location and a script. Get it made and get it out there.

FOR MORE INFORMATION ON FILMMAKERS DAVID V G DAVIES and JAMES A. KIRKBY Filmworks contact them at: